Spring in the Nursery

Right, the nursery and nursery business is what's been keeping me from working in the garden as much as I'd like but boy, is there a lot to do in the nursery. Growth is very fast right now and plants are racing out. Here's Debbie and Edita doing the job. 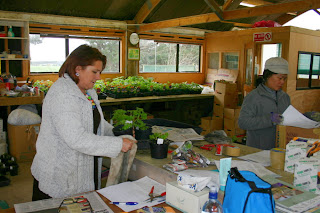 But we have another job too. When we built our new growing house in 2007/8 I put white weed matting on the floor to reflect light. This weed matting was laid over black weed matting which in turn was laid over something we call crushed shell rock (hard stuff). We did this because it worked so well in the old house when installed a few years before. Well it worked well in the new house too, until it began to break down last summer. It turned out that the manufacturer had neglected to put the UV treatment into this batch. The suppliers in New Zealand replaced the material but we have, of course, had to lay it again. 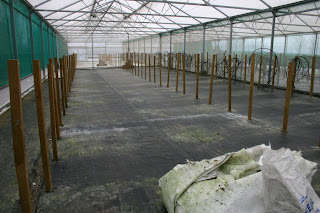 To lay the weed matting we had to first remove corrugated iron troughs that we stand our plants on and then remove the old matting - above. This done the installation was be a piece of cake, or would have been but for the support posts for the wire netting that in turn supports the delphiniums. Argh, all those posts! 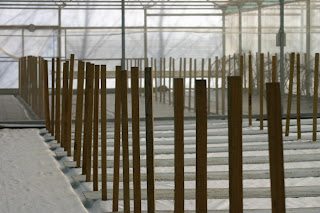 The posts were hammered into the shell rock (hard stuff, remember) after the original matting was laid. Well, there was no way I was going to remove those so we had to work round them and fortunately modern sealing materials have made a reasonably tidy job possible. It all took time but is now three quarters complete. 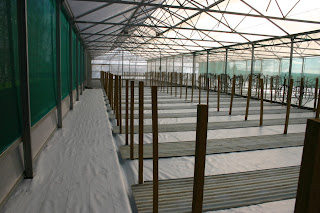 And a quarter to go. 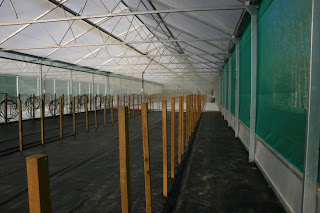 This week will be the big plant send  out. These plants are just about ready to go. We try to make most of our sales while the plants are small because that is by far the best time for planting. Unfortunately many gardeners like to see them in flower before they buy. We leave that market to someone else! 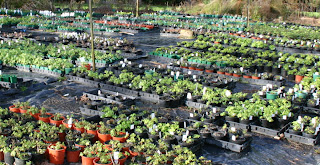 And below are some plugs waiting for planting in the trial grounds. Each year we plant five to ten thousand plants for evaluation and breeding purposes. 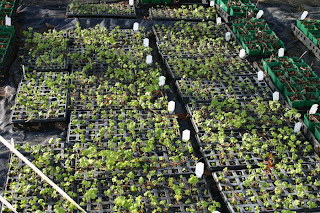 The trial grounds are not quite ready yet though. The ground is tilled and we're simply waiting for dry weather to cap it with compost which we will plant directly into, then mulch with wood shavings. 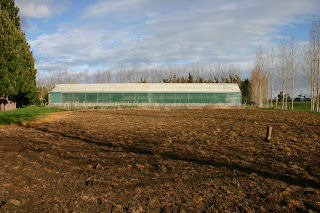 And here are some of  last season's trial beds waiting for new plants. The plants in the foreground are daylilies 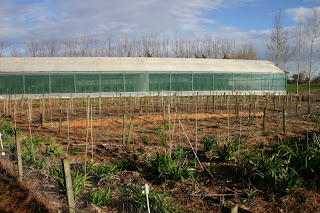