It's been a great week or so with plenty done in the garden and a good amount of real work done too. 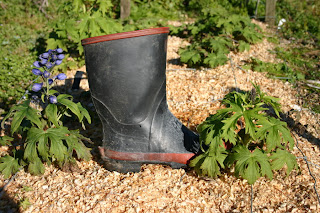 One of the most interesting things for me was seeing how the trials we are conducting to test our breeding for short delphiniums are looking. These trials were planted in the autumn. It is unusual for autumn planted delphiniums to flower during the winter but that is what a number of them are doing, showing that as well as being likely to be very short (judging by growth so far with one flowering at under 30cm tall) they are also likely to be very fast from seed to flower. This is very encouraging as the market for these plants will demand both of those criteria. We hope to have a range of good cultivars for pot production by the end of this summer.
The image above shows two short delphiniums from the same cross. The image below shows the same short delphinium with a taller one (test for cut flowers - yet to flower) in the background left. The gumboot is 29cm tall. 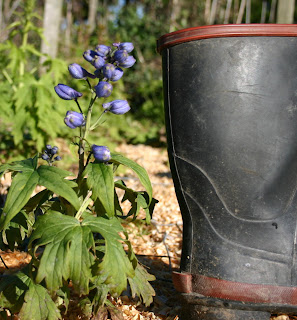 We have more trials than usual under-way this coming season so will have some really interesting looking fields of delphiniums this summer. We're looking for the short delphiniums mentioned and also to trials of several cut flower varieties too as well as more varieties for the home garden. There is one other category of delphinium attributes we are testing but we're saying nothing about that until we have something really special to announce....or not.
Watch this space over summer!
Cheers
Terry
Posted by TerryD at 6:22 PM

That gumboot, I mean delphinium, trial looks interesting - only 1 foot tall!
Do they look very different from Balladonna?

Oh yes, I'll send you an image when they open in a few days