More Time in the Garden

Janice had a quilting workshop this weekend so I took the opportunity to attack the garden again.
The hard frosts last weekend dealt to a lot of plants that normally over-winter well and I was particularly disappointed to see the thumbergia (Black-Eyed-Susan) completely collapsed, having only planted it a few months ago. It was doing very nicely too. Likewise a poinsettia that I finally got around to planting just a few weeks ago received similar treatment. Both plants were protected by trees but unfortunately the air temperature fell to -2C so that was that.
We only have killing frosts every several years so we get away with growing many tender plants. I just chose the wrong year to get them established.
Some things are growing though. Like these sweet peas: 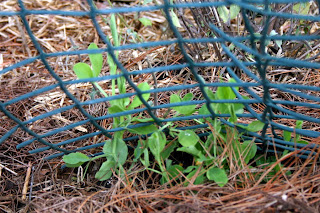 Of course there is an good side to frosts as soft weeds and nasturtiums (that were rampant)  get zapped too. So do some of the lazier insect pests. Perhaps we'll have fewer paper wasps this summer. I doubt if I've ever seen the gardens looking so bare and it sure makes tidying up easy. Frosted nasturtiums make good mulch too!
Talking of paper wasps, a considerable number had buried themselves beneath the bark of some dry eucalyptus logs that I had piled up for firewood this winter. I had taken to bringing the wood inside and stacking it close to the fire so that it was nice and handy but quickly had to revise the plan as the wasps were thawing out and having a go at the kind people who had warmed them up. That's fixed now. I leave the wood in the cold porch until it's time to stoke the fire. No more wasps. No more stings.
Posted by TerryD at 8:38 PM

Yep, our nasturtiums got zapped too and no, the tears were not over them, but over the papaya and some others.
Potatoes are looking good. I put in some more - king edward this time, hear they are good roasted :-)