Today was Market Day by the river in Wanganui again and the second week in a row we had taken a stall. The day was fine if a little cool and cloudy and, being the first day of a long weekend there were plenty of folk around. 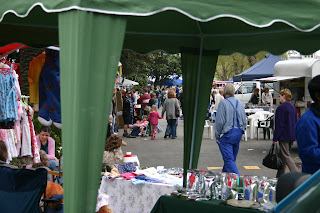 Janice and I are finding we are actually enjoying doing this. Sure, it doesn't pay much be we're having a great time socialising with all the local folk, many of them friends, the time passes quickly and we get to have a great coffee and breakfast without making it. What more could a man want? 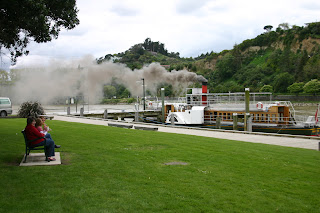 Today, Janice bought a stool, mirror, some soap, a Christmas present, breakfast, a coffee and a newspaper while I managed to score some animal manure, apples, straw, coffee, breakfast, 2 gluten free friands and probably other stuff too. We both managed to sell a few delphiniums.

We also had time to relax and watch others relaxing too and fortunately, the smoke from the PSS Waimarie was blowing away from us. 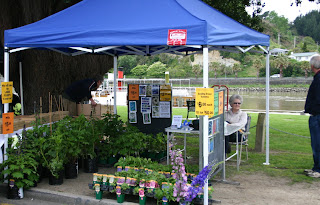 Yes, we have decided to keep going and except for the week after next when we'll be in Wellington for our granddaughter Jessica's 5th birthday, we'll be at the market until the end of November at least. We'll get investigate getting some decent signage done too because although it's only done for fun and pocket money we may as well do it right!
Posted by TerryD at 9:18 PM

What about bringing a collapsible table(s) along with you to the market to place your seedlings on? That way people can look at the pictures of the delphiniums at an easier level than having to bend to the ground. You will sell a lot more plants this way.

Also, the better the picture of the plant, the easier they are to sell at the market.