No, I'm not suspicious so today will be great.

Not being a mathematician I'm starting to lose count of the number of blogs I've written since I started up again. Certainly more than 5!

I'm up nice and early this morning in order to get rid of my farmville duties, do a few exercises for my back and have breakfast before going out to work. I'm having a day outside for the most part and hope to get a good first bike ride of the season in....probably only half an hour as, having had at least 6 months off the bike I'll get a sore bum if I do more.

Yesterday's nursery tour found the first dwarf delphinium ready to pollinate. Being Dwarf and early it was flowering all on its lonesome so I'll just self it and have a good look at its genetic makeup when its progeny flower next year. The main batch of dwarfs for breeding won't flower before Christmas as they are from seed sown this winter. I'm hoping for a few good colours on short plants. Apart from that I'll be going over the plants we have growing outside in 8 litre bags to see which to ready for sale at the local "River Traders" market this week end - not something we normally do but it should be fun if nothing else.

Only one image today, that of a white with a black bee waiting for a pollen parent to open - in vain I'm afraid. Another plant too early for a mate. 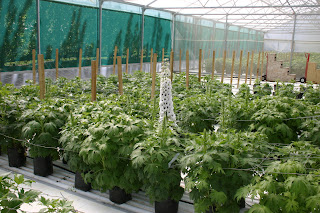 Ok, going to get on with it. Breakfast awaits. Cereal I think - I'm uncomfortable in my jeans.